Yes, this is another remake yet it’s a good one. The laughs, action scenes and nostalgia of the old school movies make this a Summertime popcorn movie to check out. The soundtrack is pretty good as well with song, “Love Over and Over Again” by Switch that’s new to me yet an old school hit.

Marsai Martin gets her career debut as an Executive Producer and I say congratulations to this 14 year old. There are laughs and most of them are from the trailer scenes. I thought there would be more laughs and better character chemistry. Issa does a great job in carrying the film. I wanted to love this movie but it was just okay. 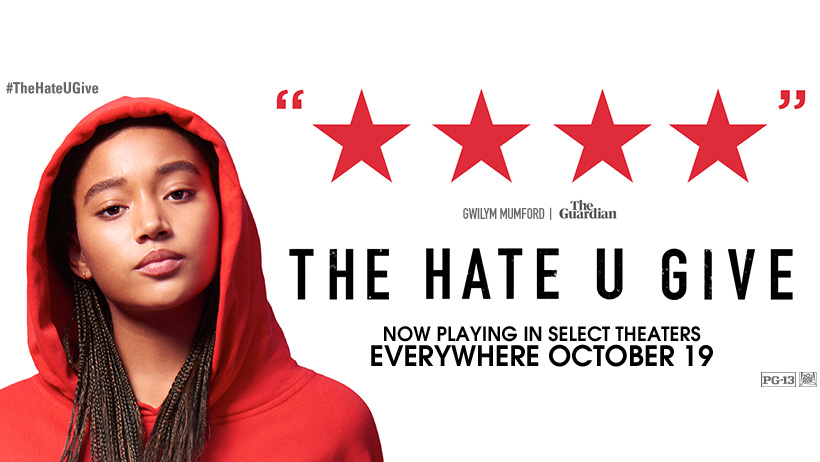 Based on the book, this is a powerful, riveting and passionate must see movie. The chemistry of the characters is felt and the film is well acted. So many emotional moments that are thought provoking. FYI, TheHateUGive=THUG

Well to say the least, the men (Larenz Tate and Kofi Siriboe b.k.a. Ralph Angel/Ra from ‘Queen Sugar’) give staggering eye candy throughout the movie. This is a mature movie for women who won’t be ashamed about anything concerning the male anatomy! Lots of laugh out loud moments. There’s also warm heartedness between the girlfriends. Fun girls night out movie yet I think the guys will like it as well. Great music and it was good seeing Queen Latifah and Jada Pinkett-Smith back together on the big screen.  LOTS of celebrity cameos!

For the most part, the storyline is predictable but it’s engaging enough with a few twists to hold your attention. Sexy couple…they want a baby…hire a surrogate…the surrogate is cray-cray!

Well, it’s been twelve years since the last movie in this franchise hit the big screen…and it’s a good add. Lots of laughs occur in the barber shop with lots of discussion on current topics especially on inner cities. All the faves are back with lots of familiar faces. I’d say it’s worth checking out if you liked either of the other two films. I thought there was a significant amount of profanity for a PG 13 film.

I didn’t have high expectations for this one based on advance screener statements. Well, I liked it and found myself laughing out loud a few times. Yes, the movie is full of gross humor and inappropriate scenes…that’s what the Griswolds’ do, right? I was surprised to see a fave actress of mine in short scene, Regina Hall.

Here’s a Summer sequel that’s hot! I so enjoyed the continuation of the characters of this movie. Lots more jokes that the original film that is depicted from Steve Harvey’s book’ “Act Like A Lady – Think Like A Man”. All of the actors are back to show us how their relationships have developed. There’s a sort of music video that the girls perform to the old school song “Poison” by BBD (Bell, Biv, DeVoe) that is very funny! NOTE: There’s an end credit scene…WAIT TILL THE SCREEN GOES BLACK. I understand there’s a soundtrack that primarily features Mary J. Blige (I loved the soundtrack from the first film).

Here’s a very sexy rom/com being released on Valentine’s Day. The storyline is “loosely” based on a film of the same name from 1986 (which I’ve never seen). This is basically a storyline of two couples on a fast paced quest in their relationships yet they discover they need to slow things down. Kevin Hart is probably the hottest comedian in Hollywood now and this film is his second thus far this year (with two more coming later in 2014). This film is also produced by Will Packer and John Legend has a catchy tune played (as he did in ‘Think Like A Man’) in the television trailer and film. I enjoyed this film and wouldn’t mind seeing it again.

Well, it’s no secret that I totally love this sequel (the original film ‘The Best Man’ was released in 1999)! The entire original cast is back on the big screen to make us laugh and we get see how their characters matured. Although it’s been 15 years since the original was filmed and 14 years since it was released, the film depicts only a 10 year gap. This film tugs at all emotions especially laughter and we get to see how much they all do care for one another. Terrance Howard’s character, Quentin is a fave of mine. He totally rocks portraying this character! He’s funny as ever! Morris Chestnut (Lance) definitely steals scenes with that gorgeous physique, ting to my smile 🙂 It’s not necessary to see the original film yet seeing it will help you to understand the characters better (there are flashback scenes from the original). I have seen this film twice already, lol, at an advance screening and 11/14 at a late night showing. Overall, a great film to check out this weekend and coming Holiday Season. An instant classic and must have DVD. P.S. The dance routine scene is great!

Join me at my movies/entertainment Page M.U.S.E. Enthusiasts in FB:
https://www.facebook.com/MuseEnthusiasts